One of the ports of call when I was lecturing on the Black Prince in the western Mediterranean was Ravenna.  It is a settlement older than Rome itself, founded sometime during the 3rd and 1st milleniium BC; the place where Julius Caesar assembled his army to cross the Rubicon and march on Rome to sieze power;and the place where Dante is buries.  Ravenna’s artistic flowering came under the protection of the Byzantine emperors, particularly Justinian with his consort Theodora who ruled from 527 AD to 565 AD.   I agreed with Willie Fraser, the artist on the cruise, that we would see as much as we could during our short stay.  So we took a taxi, with our wives, to our first destination, the  Mausoleum of Galla Placidia and from here we walked south to visit every other site.

In 402 AD the capital of the Western Roman Empire was moved from Milan to Ravenna and relied on support from Constantinople of the Eastern Empire.  Galla Placidia was the daughter of Theodosius the Great and mother of Valentinian III, both emperors of the Western Empire.  She died in 450 AD.  There is an astonishing contrast between the simple exterior in brickwork and the interior decorated with wonderful mosaics of Classic Roman and Hellenistic style.  They are the oldest and most complete of the mosaics in Ravenna.

Next to the mausoleum is the church of San Vitale, built between 527 and 548 AD when Ravenna had become part of the eastern Byzantine empire.  It is the most innovative of all the churches in Ravenna and it is unique in being circular, taking its form from San Lorenzo in Milan but developing that form to a more sophisticated degree.  Basically it is an octagon with an octagonal ambulatory round the central space and a gallery.  The centre is covered by a dome on squinches and is separated from the surrounding ambulatory by apsed shapes so that there is a constant feeling of flowing and fluid space.

Even the capitals are deeply cut so as to have the delicate feeling of lacework.  There is also a unique feature of building construction.  Within the thickness of the mass concrete of the central dome, hollow clay interlocking pots were laid to reduce the overall weight.  Almost the whole of the interior is covered in mosaics which are both figurative and abstract.  Mosaic, with its scintillating, uneven surface is a medium ideally suited to the reflected light of interiors.

The artists who produced these mosaics were not attempting to portray reality as the ancient Greeks had achieved.  Rather, they were using graphic images to portray spirituality and in so doing produced a new and stunning art.  We had arrived early in the morning and there were few people about.  To experience this fusion of innovative architecture and mosaic was breathtaking.  My friend Willie could hardly contain his excitement.

One of the mosaics that caught my eye  was that of the emperor Justinian with his bishops.  This mosaic of the emperor and his court is an everlasting reminder of the emperor’s stature as a ruler and patron of the arts.  The style and craftsmanship is of the highest quality with a fine characterisation of Justinian himself enhanced by the individual portraits of his followers.  The emperor with golden paten, purple mantle and halo is accompanied by archbishop Maximian.  The imperial authority of Byzantium and the Church of Ravenna are united in homage.

Another mosaic was that of the miracle of the loaves and fishes.  The way in whiich the story is told shows the spectator that something miraculous is happening.  The background is laid out with frogments of golden glass and on this gold background no natural or realistic scene is enacted.  The whole scene looks like a solemn ceremony.  At first glance, the picture looks stiff and rigid but the artist would be well acquanted with Greek and Roman works.  If the picture looks primitive, it is because the artist wanted it to be simple.  The Egyptian idea of the importance of simple clarity has returned.  The observation of nature, awakened in Greece in 500 BC was put to sleep again in 500 AD for another seven hundred years.

We then went to the Arian Baptistery, built by the Arian Gothic emperor Theodoric, around 500 AD  and almost contemporary with S. Vitale.  It is an octagonal brick building whose floor is below the level of the existing ground level.  It was here that baptism took place by full immersion in the Arian tradition of Christianity.  The flattened dome has a central image of Christ being baptized by St John the Baptist surrounded by the figures of the twelve apostles, divided by palm trees.  The whole composition is carried out in a limited palette of white, blues and greens with touches of red, all on a gold background.  Originally, the interior was decorated with further mosaics as tiles have been found in excavations. 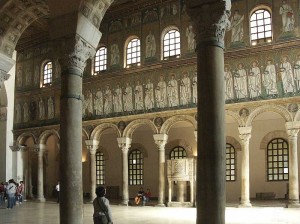 rom here it was a few minutes walk to the basilica of S. Apollinare Nuovo.  The building was erected in 500-525 AD by Theodoric, the Arian king of the Goths as his Palace Church and then reconsecrated in 561 in the Latin rite.  Only in the 9th century was it dedicated to S. Apollinare, the first bishop of Ravenna.

It takes the traditional form of a basilica, originally a form of building used by the Romans for law courts and other public activities, with a central nave, side aisles and apse at the east end.  It is a linear building with the twelve columns on each side supporting the arches of the upper walls marching towards the apse and high altar.  In the upper part of the wall are the windows of the clerestorey.

On the left is a procession  of  22 virgins, headed by the three wise men, towards the Madonna and Child.  On the right 26 saints and martyrs head towards a figure of the enthroned Christ, all emphasizing the linear character of the church.  Legend says that Pope Gregory the Great ordered the mosaics to be blackened because their brightness and sparkling images distracted the congregations during the services.

Five kilometres to the south lies the town of Classe and the basilica of S. Apollinare in Classe, finished in 549 AD.  The first bishops resided in Classe and only later did they move to Ravenna.  It was bishop Ursicino who ordered the construction of S. Apollinare in Classe and at the same time the church of S. Vitale in Ravenna.  However, we did not have time to visit Classe, so turned back towards the centre of town.  On the way we called in the  basilica of St John the Evangelist to see the preserved mosaic fragments.

At this point we stopped for a light lunch and then carried on to the cathedral, a disappointingly dull baroque building completed in 1737 on the site of a former church.  However, right next to it and forming part of the old church is the orthodox Baptistery of Neoniano.  This is the oldest remaining monument of Ravenna, dating from around 500 AD and thought to have been built on a Roman bath.  The mosaic of the central dome portrays St John the Baptist baptizing Christ standing in the waters of the Jordan and surrounded by the twelve apostles, individually named and separated by acanthus plants.  Around the walls, between the windows, are niches with Old Testament prophets.  Below are eight columns carrying the supporting arches with more acanthus leave decoration.  In the centre is the octagonal baptismal font itself for full immersion.

At this point we had run out of time and had to return to the ship but had managed to see all the important mosaics.  It was a marvellous experience to see this heritage of Arian, Orthodox and Latin traditions all in one small area of Ravenna.